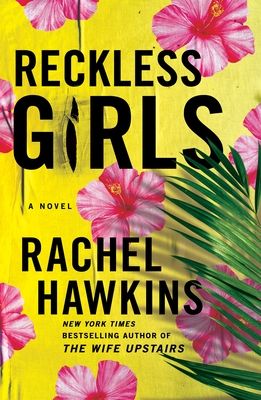 "When you let go of the version of yourself that got you here in the first place.  You can cling to the before, or you can try to live in the after."

Lux and her boyfriend Nico meet college roommates Amma and Brittany. The roommates offer Nico $50,000 to sail them to Meroe Island, a place that seems like paradise and far from civilization.  The foursome head out on Nico's boat. When they arrive there's another couple there, Jake and Eliza and they seem perfect; the golden couple.  Everyone is having a great time being off the grid on the exotic island until a seventh person arrives, a creepy lone sailor. Everything starts to go a little crazy after that.  Each person harbors their own secrets and nothing appears as it seems. When one person shows up dead and another goes missing it appears the island is closing in on them all, no one can be trusted and they begin to wonder if any of them will make it off the island alive.

Reckless Girls by Rachel Hawkins is a slow burn story and at the same time full of suspense. What's not to love about a group of strangers on a deserted island that appears to be picking them off one by one? While the story started out a bit slow, I also couldn't put it down (I read it in a day).  The story is told in multiple perspectives and dual time lines.  I love that Hawkins gives the reader just enough info to get some idea of what is going on.  At times I thought the characters made some not so bright decisions but then again they were suppose to be reckless, hence the title. Overall another great novel by Hawkins!  Highly recommend!