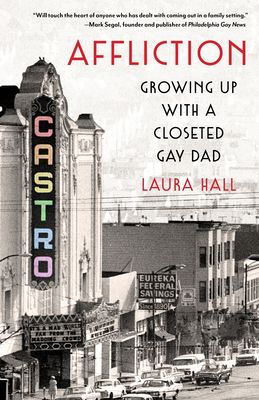 This is the story of Laura or Laurie Hall as she reflects on her childhood after finding out her father, Ralph Hall, was gay when she was 24. It was the mid 1970's. By the time Laurie found out, her mother had already known for almost two decades.

Ralph Hall joined the army after being arrested for being gay, sadly I didn't know this was part of our US history, but I guess I shouldn't be surprised.  He met Irene in the 1940's and decides to marry her. They end up having four children. Ralph is a devoted father to his children and devoted husband to his wife but also struggles with his identify in a world where being queer is not accepted.

Laurie reflects on her life, trying to pinpoint how she could have missed this about her dad. It tells the story about how this secret her dad kept form her shaped the lives of her entire family.  It tells the untold story of those who were forced to live their life in secret, being unable to be their authentic self and the impact of that on those around them.

This was such a great read.  The chapters were short which made the book a fast read.  I loved looking at the photographs in the book too. I found it heartbreaking that people felt forced to hide who they are and while I knew this to be the case during this time period, I appreciated being able to see the perspective of someone who went through this. While I know we have a long way to go for LGBTQ+ rights, the story also made me appreciate the advancements we have made in the last decade.

Overall, I highly recommend it.

Thank you to Sabrina Dax PR and Laura Hall for the advanced readers copy in exchange for my honest review.  Book releases July 13th.